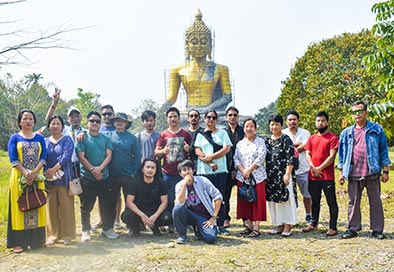 MIAO, 28 Mar: A group of 20 people, including tour operators, homestay owners and new entrants in the tourism sector from five districts, arrived in Miao in Changlang district on Sunday.

The group will halt at the Namdapha National Park on Sunday night. They will go for birding and take butterfly walks inside the park on Monday. They will also visit the fringe villages.

The group set off for Miao after visiting Noi Dhamma, also called Lal Pahar, where a meditation centre is coming up and a large Buddha statue is being built, which is slated to be the second highest in Asia.

At Miao, the group will stay for two days. During their stay, they will visit the River Cafe, a popular riverside restrobar, the Namdapha jungle camp, a resort on the banks of the Noa Dihing river, the Christ the Light cathedral, and the TR Camp, which is best known for carpet production.

Thereafter, they will have an experience of the historic Ledo Road or Stilwell Road when they visit Jairampur and the World War II cemetery on its outskirts, before winding up their tour.

Earlier, the group had toured Roing, and also visited the ruins of Bhismaknagar.

In Tezu, they visited Mishmi houses and took a tour of the market area. The next day, the group arrived in Wakro, where they all put up in homestays.

They visited Parasuram Kund and had a tour of the market. On the way, the group also had photo sessions and plucked wild vegetables which they cooked and relished later. They also had a taste of Chambai, the Mishmi rice delicacy.

Upon their entry to Namsai district, the group experienced the food and water at Saamkhey Resort, which is located on a small river island, before proceeding to the Golden Pagoda Eco Resort for a night halt. They were also taken to the Namsai market and the Buddhist monastery.

The tour is being managed by A1 Travel Management based in Roing, whose proprietor is Neharika Sehgal Umbrey, who is creating a niche for herself in the state’s tourism industry as she dons the role of a guide and manager and even takes tourists out on drives herself.