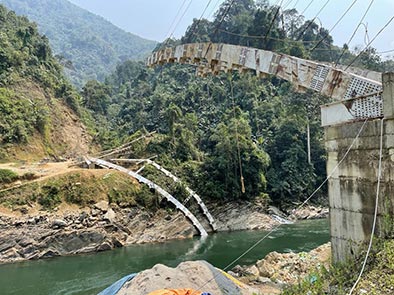 ITANAGAR, 30 Mar: In a major setback in the effort to connect Tali ADC headquarters in Kra Daadi district by road, the under-construction steel arch bridge over the Kumey river at Kuwa Camp on the Gangte-Tali road reportedly collapsed on Sunday evening.

The bridge is funded under the cabinet committee infrastructure of the state plan, with an amount of Rs 1,368.16 lakhs under the Tali PWD division. The work is being executed by M/s Vivek Enterprise; the supply of steel parts is being done by Guwahati (Assam)-based M/s KP Construction. The bridge’s completion deadline is 13 November, 2022.

It is reported that the 90-metre span bridge is being funded by the state government after the Bailey bridge on the same location over the Kumey river collapsed in September 2019 after only months of having been completed. However, it is claimed that no inquiry was conducted over the collapse of the old Bailey bridge.

Sources in Palin informed The Arunachal Times that the launching tower, the tie beam, the bracing wire, etc, on the left bank of river (Tali side) collapsed. However, the abutment and the anchor blocks are intact, with little damage. The cause of the collapse is stated to be a sudden gust of high-velocity wind which caused the steel fabrication to sway.

Sources also informed that no damage occurred on the abutment, the anchor block and the steel fabrication on the Kuwa Camp side (right riverbank). The sources also said that no sign of human sabotage was reported.

It is learnt that, soon after the report of the collapse was received by the district administration, Tali ADC Kipa Raja rushed to the spot on Monday and assessed the ground situation to ascertain the cause(s) of the collapse. Raja reportedly submitted an independent report on the incident to the Kra Daadi deputy commissioner.

The PWD commissioner Kaling Tayeng informed that the government has taken serious note of the incident and the PWD chief engineer (CZ-A) has been directed to inspect the bridge immediately.

The government has also initiated a departmental inquiry under a superintending engineer to find the cause(s) of the bridge’s collapse and fix responsibility on the official or agency concerned. The inquiry report is expected to be submitted within a week.

The collapse of the under-construction steel arch bridge will potentially slow down the pace of development of road connectivity to Tali ADC headquarters, which is considered one of the remotest administrative headquarters in the state.

Chief Minister Pema Khandu has set a deadline to complete the Tali road by March 2022.