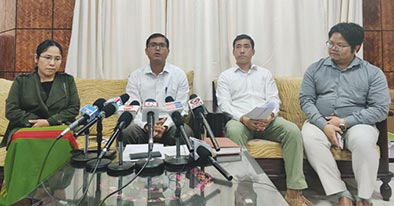 ITANAGAR, 30 Mar: Arunachal Pradesh Staff Selection Board (APSSB) Secretary Santosh Kumar Rai on Tuesday informed that only 11 candidates out of 255 could qualify the skill test conducted by the APSSB on Sunday for the posts of lower division clerk (LDC), junior secretariat assistant (JSA), record keeper/record clerk and computer operator.

Altogether 93 posts (76 posts of LDC, eight of JSA, and nine posts of record keeper/clerk and computer operator) were vacant but the candidates could not fill them as they failed in the skill test conducted on Sunday.

The final results of the APSSB examination were declared on Monday. The combined written examination had been conducted on 21 March and the skill test was conducted on 28 March in six batches for the candidates who had been shortlisted for the posts of LDC, JSA, record keeper/record clerk and computer operator. The skill test consisted of typing on a computer @ 35 words per minute as per the recruitment rules and basic computer application test.

Briefing the media after declaring the examination results, Rai said, “It was shocking to every one of us that only 11 candidates could clear the skill test out of 255 appeared candidates. We were expecting that maximum would clear in skill test.”

“Because of that, the posts remained vacant and could not be filled,” said Rai, adding that the vacant posts would be advertised soon.

The APSSB secretary informed that the skill test was qualifying in nature, and only candidates who qualified the skill test have made it to the final selection list for the posts of LDC, JSA and record keeper.

Rai further clarified that there was no requirement of a skill test for the post of stockman and the final list was prepared based on the marks scored in the written examination.

He further claimed that currently the APSSB is “one of the leading boards in the country in term of fairness and promptness, as across the country conducting examination is the biggest challenge.” He also informed that “the board is planning to come up with a tentative programme of the APSSB examination calendar for the convenience of candidates.”

Rai also informed that more than 1,280 Group C posts have already been advertised, and the board’s next target is to conduct examination for those vacant posts. “Among them are 219 posts from district quota vacancy,” the secretary added. He commended the district administrations and the SPs of 11 districts of the state for the successful conduct of the APSSB examination. He also lauded the central superintendents, supporting staff and invigilators.

The APSSB examination had been marred by a cash-for-job scam in early February, 2020, which had resulted in the suspension and arrest of the then undersecretary and many others. The Special Investigation Cell has filed chargesheets against 19 people involved in the scam.