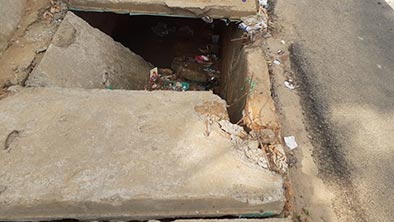 ITANAGAR, 3 Apr: The concrete slabs of the newly constructed footpath in Itanagar have started to break down barely a week after the chief minister dedicated the Chandranagar-Papu Nallah road to the people on its ‘completion’.

Several broken and collapsed slabs can be seen along the pavement from near the ANSU office to Akasdeep market complex, which is a danger to the pedestrians.

While the footpath is left uncovered in some stretches, it has developed cracks in many locations, making it almost impossible to walk on it. There is every possibility of pedestrians falling into the drains if they step carelessly on it.

It is possible that the footpath was constructed in a hurried manner to meet the deadline set by the chief minister, which resulted in poor quality construction.