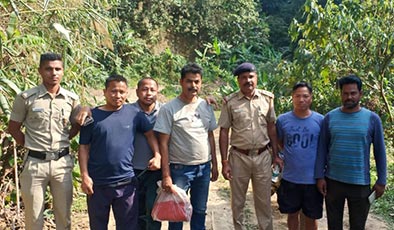 ITANAGAR, 3 Apr: The United Liberation Front of Asom – Independent (ULFA-I) has released one of the two employees of Quippo Oil and Gas Infrastructure Ltd it had kidnapped last year.

Changlang SP Mihin Gambo informed that Pranab Kumar Gogoi was released by the ULFA-I on Saturday. However, the whereabouts of the other employee, Ram Kumar, from Bihar, is still unknown.

The two were kidnapped from Kumchai Hka in Diyun circle of Changlang district on 21 December, 2020.

The SP informed that the police have since interrogated Gogoi and had him undergo medical examination. Later, Gogoi was handed over to his family members. It is believed that Gogoi and Ram Kumar were kept in a camp by the ULFA-I.

The ULFA-I had earlier set 16 February as the last date for payment of ransom, which is reported to be between Rs 10 and 20 crore. Prior to this, the ULFA-I had released two recorded videos on 29 January, in which the kidnapped employees were seen appealing to Bihar Chief Minister Nitish Kumar and Assam Chief Minister Sarbananda Sonowal to secure their release.