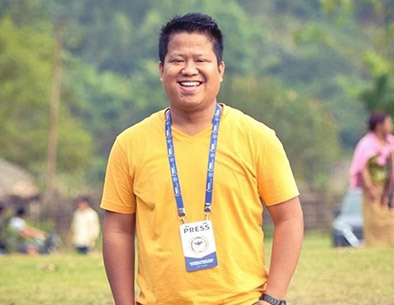 ITANAGAR, 5 Apr: Changlang-based journalist, Jason Khangthing passed away on Monday night in his line of duty.

The reporter of Arunachal Today was reportedly returning to Miao after he had visited the Miao-Vijoynagar Road on recce.

Kanghthing was involved in an accident this afternoon at Mpen, about 6 kms from Miao town.

Reportedly, he was riding pillion on a motorbike that his uncle was driving. At the 4 Mile point of Mpen, there were three tractors ahead of them. They reportedly overtook two tractors but were hit by the trailer of the third one. He was rushed to Dibrugarh in a very serious condition where he passed away.

The driver of the tractor was reportedly driving without a license.

While the details of the incident have to be investigated completely, the state’s press fraternity expressed its deepest sorrow on his passing.

“Khangthing was a promising journalist who had yet to realise his full potential. His death has left us with a void that cannot be filled,” a statement from the Arunachal Pradesh Union of Working Journalists, Arunachal Press Club, and Arunachal Electronic & Digital Media said.

The joint statement called for a fair investigation into the incident.

“At this time of sorrow, our prayers are with the family,” the statement said.