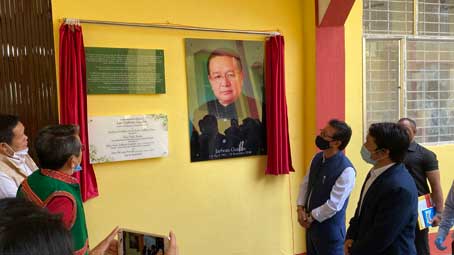 Attending the programme, Education Minister Taba Tedir recalled the contributions of Gamlin in shaping legal education in the state.

Tedir focused on the opportunities to be explored through legal education, and dwelt on how the institute has a huge potential “in developing areas like intellectual property rights, arbitration and conciliation and other emerging areas.”

The minister also inaugurated the commemorative plaque of late Jarbom Gamlin in the presence of dignitaries, faculty members and staff of the college.

Retired major general Jarken Gamlin delivered a talk on the ‘Role of military in nation-building’. He highlighted the significance and valour of being a member of the military.

He focused on the notion of developing a sense of nationalism in each individual. “The pledge of safety, honour and welfare of the country is the bedrock of true military leadership, which makes it different from all other professions,” he said.

In his concluding remark, he stated that the military has stood the test of time and has consistently upheld and protected the nation’s constitution with unflinching loyalty.

Earlier, the college’s Principal (in-charge) Mizum Nyodu stated that the lecture series “intends to inculcate a holistic and multidisciplinary approach in understanding law from various range of perspective.”

“It would be conducted every year,” Nyodu said.

The student representatives of the college submitted a memorandum to the education minister and appealed for redress of grievances like appointment of staffers, permanent solution to water crisis in the campus, an ICT-enabled library with electronic journals, construction of a library building, etc.

The college’s magazine was also released by the dignitaries present on the occasion.