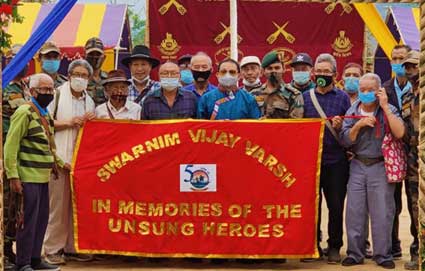 MIAO, 16 Apr: The Lekhapani battalion of the Indian Army celebrated the 1971 war heroes in a function with veterans at the army camp here in Changlang district on Thursday.

The Indian government is celebrating this year as ‘Swarnim Vijay Varsh’ to commemorate the liberation war of Bangladesh in 1971.

The army camp in Miao celebrated the decisive and historic victory over Pakistan, which led to the creation of Bangladesh.

The celebration was part of various commemorative events which are being conducted pan-India, wherein war veterans and veer naris will be felicitated and events like band displays and seminars will be conducted. In Miao, the 14 war veterans of 1971 war from various units of the Indian Army attended the event along with 1999 war veterans.