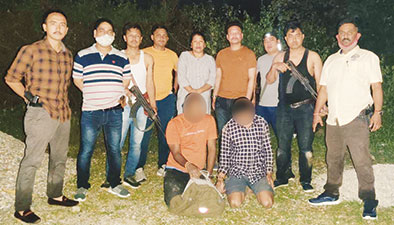 The drug peddlers have been identified as Rahul Doley, of Panigaon, Assam, and Dibakar Kuli, of Bedeti, Assam.

Capital SP Jimmy Chiram informed that “this is the biggest catch of contraband drugs by the capital police.”

The team kept surveillance on suspected traffickers who were reportedly active from the Assam side and would cross over to Arunachal via the river’s bank near Banderdewa.

On 23 April, the team received a specific tip-off about drug trafficking taking place from the Assam side via the river in Karsingsa area, and laid an ambush.

“The team, divided in different groups, led by DSP K Sikom and assisted by SI N Nishant and SI AK Jha, managed to apprehend two drug peddlers from Dobum river site area after a daylong cat and mouse play at around 8:30 pm while they (the drug peddlers) were trying to cross the river,” the SP informed.

The team, assisted by Special Executive Magistrate (Narcotics) Oli Koyu seized the contraband drugs and a regular case has been registered at the Banderdewa police station under Section 21 (b) NDPS Act.

Further investigation will be taken up by the Banderdewa police station OC, Inspector T Hassang.

The SP lauded the commendable work of the capital police, the special magistrate (narcotics) and the National Anti-Corruption and Crime Prevention Council, Itanagar, who helped the police team in executing the special operation.