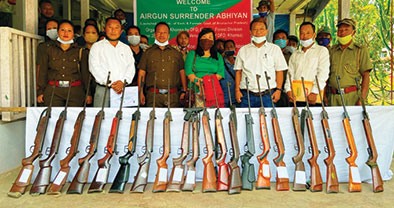 KHONSA, 28 Apr:  A total of 22 air guns were surrendered at the DFO’s office here in Tirap district, in presence of Kapu block ZPM Wiram Matey on Wednesday as part of the state government’s ongoing ‘Air Gun Surrender Abhiyan.’

During the programme, Khonsa Divisional Forest Officer Pusom Tangha asked those who are yet to surrender, to cooperate with the department and surrender their air guns at the earliest.

He emphasized on the importance of protecting the ecosystem and appealed to the farming community of Tirap district to avoid deforestation in and around water sources.

Later, ZPM Matey gave away certificates of appreciation to all those who surrendered their air guns.