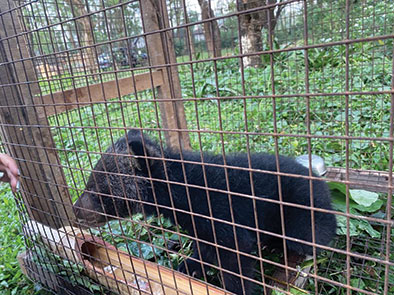 PASIGHAT, 30 Apr: A healthy female bear cub around 3 months old, which was rescued from the lake Gueng area, some 7 kms from Riga village in Siang district by a trekking team, was handed over to the divisional forest officer (DFO) of Daying Ering Wildlife Sanctuary (DEWS) here in East Siang district.

While handing over the bear cub, Daniel Jamoh, from Yagrung village in East Siang district, on Friday informed that he was part of the team that visited the natural lakes, locally called ‘gueng’, which comprises six natural lakes on the high mountain, and the cub was found near the trekking route to the lake.

“The bear cub was found stranded on the foot track, and seemingly the mother

of the cub must have been killed by hunters, so we decided to rescue it and hand it over to the zoo or to the wildlife department, as the motherless small cub could be killed by some other predators in the jungle,” said Pangin-Boleng MLA Ojing Tasing, who led the team.

He suggested to the wildlife official to name the cub ‘Gueng’, deriving from the name of the lake.

Meanwhile, DEWS DFO Tasang Taga expressed appreciation for the MLA and Jamoh for rescuing and handing over the motherless bear cub to the wildlife department.

“The cub will be sent to the Centre for Bear Rehabilitation and Conservation, Pakke tiger reserve, Seijosa, on Saturday, where the cub will be looked after in the centre and the permission to shift the cub from DEWS Pasighat division office to Pakke tiger reserve has also been received from the PCCF and the chief wildlife warden, Itanagar,” Taga said.