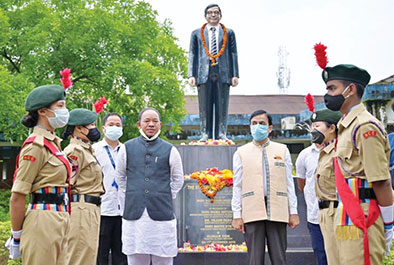 ITANAGAR, 8 May: Former education minister Dera Natung was remembered on the occasion of his 20th death anniversary during a programme held at Dera Natung Government College (DNGC) here on Saturday.

spoke on the contributions made by Dera Natung in transforming the state’s education scenario.

“He was instrumental in bringing the Eklavya Model Residential School (EMRS) to the state, besides other institutions in the state. Late Natung had an imperative role in transforming the education sector of the state and providing the youths with quality education. Therefore, the youths of the state should carry forward his vision by participating in educational reforms and other development activities,” he said.

“Before entering politics, late Natung was the first president of the All Nyishi Students’ Union (ANSU). I had a close association with him and witnessed how humble and visionary he was,” the minister said.

DNGC Principal MQ Khan, who also paid tribute to the late minister, said, “Late Natung, through his acquired education proved himself as a man of vision and transformed the state as a minister with various portfolios. His unfortunate death is irreparable.”

He added that Dera Natung not only represented the state as a minister but was also a role model for all the youths in the state as a youth leader, social worker, and above all, a good human being.

“On 8 May, 2001, he (late Natung) met with an unfortunate air crash while on a tour to Tawang and East Kameng districts to survey sites for educational institutions. He shall always remain immortal by his virtue, great deeds and actions,” Dr Khan added.