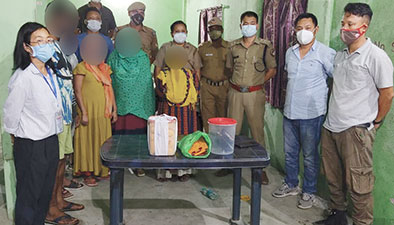 ITANAGAR, 21 May: The capital police on Friday made its biggest seizure of drugs this year through the Banderdewa police station (PS) team.

Under the leadership of Itanagar Capital Region (ICR) SP Jimmy Chiram, a team led by Naharlagun SDPO Rike Kamsi and Banderdewa PS OC Inspector Tadu Hassang identified and apprehended the peddlers from the Banderdewa area. Banderdewa is considered a hub from where drugs are supplied to the ICR.

On 20 May, a reliable source engaged by Hassang informed that one main peddler had recently brought a huge quantity of drug (suspected heroin) from Nagaon, Assam. The drug so brought was to be supplied in the ICR.

After getting the tip-off, a team of the Banderdewa PS, led by Hassang, raided the Hotel Holiday Inn in Banderdewa. A detailed search was conducted in the presence of Executive Magistrate Ritu Tawe, and 21 packets of suspected heroin, worth Rs 10 lakhs, along with a cash amount of Rs 20,300 and five mobile phones were seized.

Five occupants, identified as Sahida Khatun (36), Faruk Ali (19), Riyajul Islam (23), Suria Khatun (22) and Sulema Khatun (23), all from Nagaon in Assam, have been arrested for further examination.

A case [No 16/21 u/s 21 (C), NDPS Act] has been registered at the Banderdewa police station, and the case has been endorsed to SI RK Jha for further investigation.

The capital police are continuing their efforts against drug peddling, and in the last two months, more than 10 cases have been registered and over 20 people arrested.

On Thursday, a Naharlagun PS team recovered 943 grams of cannabis and arrested one person u/s 20 (b) (ii) of the NDPS Act.