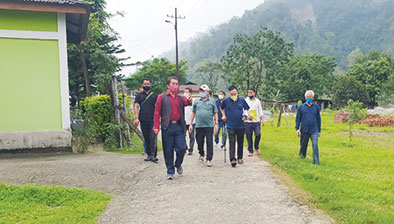 DOIMUKH, 22 May: Rajya Sabha member Nabam Rebia visited the Christian prayer centre in Harahapa near here on Saturday and assured that the management committee’s plea for support for the centre’s infrastructural development would be taken up with SJETA Minister Alo Libang and Chief Minister Pema Khandu.

Papum Pare DC Pige Ligu, who accompanied the MP during his visit to the centre, was asked to liaise with the NEEPCO and take up the matter of the construction of the prayer centre’s boundary wall.

Rebia said that the prayer centre provides medical assistance and rehabilitation to many people.

“Such centres require help and support from all sections of society, including the government. I had granted Rs 50 lakhs for construction of a large prayer hall, which is under construction,” Rebia said.

The MP also provided ration items for the prayer centre.

A team of the BJP’s Papum Pare district unit, led by its president Teshi Sony, besides Taba Laji of Naharlagun, Pumcho Tapuk of Itanagar, Taba Tako of Doimukh, and Kamku Jomoh, Tana Paye and Taba Taro of Hoj also donated essential ration items for the centre.