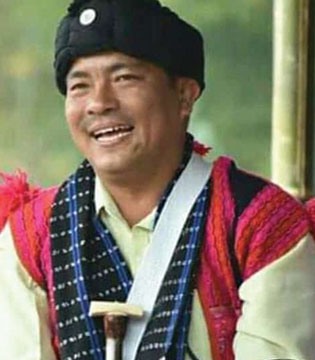 ROING, 24 May: Bakhrim Chikro, former general secretary of the Cultural and Literary Society of Mishmi (CALSOM), breathed his last in the morning of 24 May in East Siang HQ Pasighat.

As per reports, Chikro was undergoing treatment for Covid-19 at the AYUSH medical Corona care centre in Pasighat for the last 10 days. He was suffering from severe breathing issues, and had been referred from the Lohit district hospital on 14 May.

Chikro was born on 15 August, 1977, at 19 Mile (Kabruliang) in Sunpura circle of Lohit district. He is survived by his wife, a son and three daughters.

The CALSOM said that it is deeply shocked and saddened by the untimely demise of its former general secretary, and offered heartfelt condolences to the bereaved family.

“Late Chikro was a worthy member of the society. His dedicated and selfless service towards the Mishmi community during his stint as the secretary of CALSOM, as well as during his entire lifetime, shall be remembered by

all with a deep sense of gratitude. May the almighty grant enough courage and strength to the bereaved family to bear the great loss. May the departed soul rest in eternal peace,” said the CALSOM.

The Mishmi Welfare Society (MWS) also expressed condolences to the bereaved family. “The whole Mishmi society mourns with you and remembers the extraordinary and remarkable life of late Chikro, who devoted his life for the interest of the Mishmi community,” the MWS said in a letter to the wife of Chikro.

“Late Chikro had served the society in various capacities in CALSOM, AVP Lohit vibhag (vice president), Preservation and Propagation of Mishmi Faith Promotion (Tachow-Klumya) and so many other organizations in his areas. His contributions towards the society under various capacities will never be forgotten,” the AVP said.

It expressed condolences to the bereaved family, and prayed for eternal peace of the departed soul.