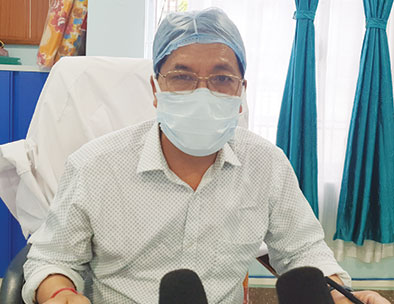 NAHARLAGUN, 26 May: Capital DMO Dr Mandip Perme has appealed to citizens to cooperate with members of the rapid response teams (RRT) and contact tracing teams (CTT) that have been deployed in various colonies and sectors in the Capital region as “figures are increasing with people not maintaining Covid SOPs and guidelines.”

Urging citizens to obey the advisories issued by the capital administration, health department and state government, the DMO said, “We have already started with free random testing and all residents under micro containment zones in various colonies and sectors of the Capital Complex can get tested. Random tests are being done so that we can conduct proper surveys and provide medical kits and suggestions to those who test positive.”

He also said that those who require support or suggestions can contact the control room at the mini secretariat, the triage centre at Hotel Donyi Polo (Ashoka), any flu clinic in the twin capital city, as well as the CTTs and RRTs.