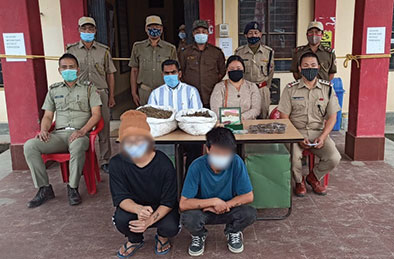 ZIRO, 28 May: Acting on a tip-off, a police patrolling team here in Lower Subansiri district conducted a search operation in Hapoli township on Friday and apprehended three cannabis peddlers from the crafts centre there.

The apprehended peddlers have been identified as Dani Tobin (28), Kago Tako (29), of Hija village, and Tasso Radhe (26), of Hari village.

The police team, headed by SI Tadu John, also recovered 7 grams of cannabis (ganja) from the possession of Tasso Radhe.

Following disclosure by Tasso Radhe during preliminary investigation that the packet of cannabis had been purchased from one Millo Ambo (23) of Club Road, Hapoli, a team of police led by Ziro PS OC Inspector Millo Lalyang, accompanied by Town Magistrate Tama Yajum, conducted a surprise raid at the rooms of Ambo. The police team seized approximately 4.35 kgs of cannabis, along with Rs 1,910 and four packets of plastic pouches.

“Instantly, two persons were arrested in this case, and a case was registered at the Ziro police station in this connection. SI Hage Loder was endorsed for investigation,” DSP (HQ) Tasi Darang informed in a message.

Many drug peddlers have been arrested in the past three months under the supervision of the Lower Subansiri SP, said the DSP, adding that efforts are on to make Lower Subansiri district free from the menace of illegal drugs.