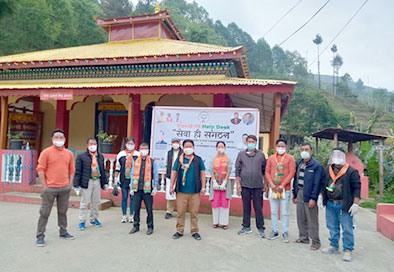 BOMDILA, 30 May: The West Kameng district unit of the BJP on Sunday celebrated the completion of seven years of the Narendra Modi-led NDA government at the Centre and the four-and-a-half years of the Pema Khandu-led BJP government in Arunachal.

To mark the occasions, the party organized various activities, such as “distribution of facemasks (1,500), sanitizers, check-ups of body temperature and oxygen levels of around 250, using thermal scanner and oxymeter, etc,” it said in a press release.

Various achievements and welfare activities of the Modi government were also highlighted by the district BJP committee.

Party workers, office bearers of the district BJP and various morchas, and former and present panchayat leaders of Sera village attended the programme.