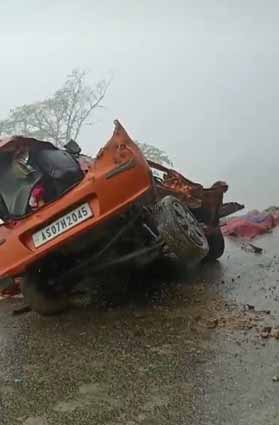 BOMDILA, 5 Jun: In a tragic accident which took place on the BCT road, near Saddle, in West Kameng district on Saturday at 9:30 am, two persons lost their lives while two others received serious injuries when their car was buried under the debris of a massive landslide caused due to incessant rainfall.

The driver of the Alto K10 car, identified as Motu from Bomdila, died on the spot. The passengers have been identified as Assistant Sub-Inspector (T) K Sonar from the Bomdila police station, his wife and two children. They were evacuated to the 181 military hospital in Dahung. However, Sonar’s wife died later.

Sonar and his daughter have been referred to Tezpur (Assam) in a critical condition, while his son escaped unhurt.

The Bhalukpong PS OC informed that one head constable also received minor injury on the same stretch of the road. (DIPRO)