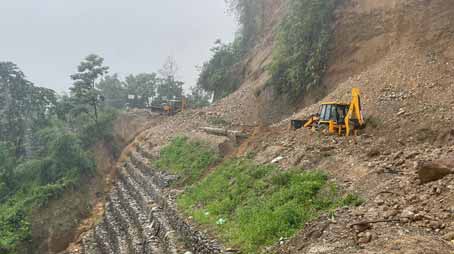 DDMO (in-charge) Tem Kaya informed that there was a massive landslide near the Ganga-Jollang road but it was cleared by deploying men and machineries. He requested commuters taking the Jollang road and those near the culvert bridge near the Himalayan University in Pagatara to remain careful.

He informed that, due to a landslide near Panchali in Itanagar, the residents staying nearby have been asked to shift to the relief camps or to safer locations.

Kaya further informed that one kutcha house was completely damaged due to a massive landslide in Kola Colony near Panchali, and that the residents have been shifted to their relatives’ house.

In Nirjuli, a landslide occurred in Rayo village, and the nearby residents were asked to shift to the relief camps or to safer locations.

Also, one SPT building, one local kutcha house and one residence in Lekhi Koto village were submerged in floodwater. Apart from these, three fish ponds were also damaged.

The DDMO informed that five people were expected at the relief camp in Naharlagun on Saturday and all arrangements have been made by the district administration in this regard.

Meanwhile, ICR DC Talo Potom has requested the residents, especially those in vulnerable locations or landslide- and flood-prone areas, to shift to the relief camps or to safer locations.

He informed that basic relief materials would be provided by the district administration at the relief camps.

The DC had earlier issued an order on 12 May, directing the residents/people residing in vulnerable areas to vacate such areas and move to safer locations.

The DC further informed that, for any assistance, the number 1090 can be contacted using BSNL SIMs.

It is pertinent to mention that earth-cutting has been banned in the ICR upto August 2021, as per an order issued by the then additional district magistrate on 9 April. (DIPRO)