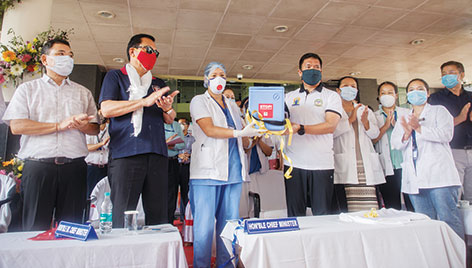 ITANAGAR, 21 Jun: Chief Minister Pema Khandu launched the ‘Tika maha abhiyan’, aiming to vaccinate all citizens of 18 years and above in the next few months on a mission mode, starting Monday.

He informed that, after the launch of the vaccination programme in January this year, Arunachal has so far covered nearly 4,00,000, which is 25 percent of the total estimated population and 38 percent of the eligible beneficiaries.

Khandu said that villages and habitations in extremely remote and difficult-to-access areas with tenuous roads, electricity and telecommunication network have been covered despite adverse weather conditions and disruptions in road and air linkages, through the age-old system of long foot marches and head loads.

Launching the abhiyan, Khandu announced that there will be walk-in and on-site registrations in order to cover maximum unvaccinated population of all age groups (18 plus) in the shortest possible time.

“Those beneficiaries who do not have any photo identity proof as prescribed would be vaccinated in the districts through special sessions organized under the person without identity (PWI) module in the CoWIN application, especially in respect of prisoners, old-age homes, rehabilitation centres etc,” he said.

The CM advocated increasing the capacity to administer 5-6 thousand doses to 12,000 doses daily “with proactive and strenuous capacity upgradation efforts.” He suggested to the district administrations to identify at least one PHC or CHC in the rural and interior areas for equipping them with all basic infrastructure and equipments to tackle Covid cases.

“It is speculated that the third wave is coming. Therefore, we have to be prepared for it. As the third wave is supposed to affect children in particular, I have directed constitution of a state task force with a special group of child specialists as members to prepare a plan to deal with it if it comes,” he said.

Khandu urged all to cooperate with the healthcare workers and the health system machinery to take advantage of the vaccination programme and campaign as the state strives to cover the 18+ eligible population within a period of three months, and to become among the first states to achieve full vaccination status.

He also urged the people not to become complacent and continue observing Covid-appropriate behaviour to avoid repetitive waves or surges in infections.

The chief minister directed all the deputy commissioners (DC) to ramp up the Covid-19 vaccination drive to achieve 100 percent vaccination of all above 18 years of age within the next three months.

“Henceforth, there will be only one single category of beneficiaries and that is 18 years and above,” he said, chairing the monthly e-Pragati meeting with all commissioners, secretaries and DCs here.

Khandu asked the DCs to “facilitate self and on-spot registration of beneficiaries, besides encouraging people of all age groups who are eligible.” He stressed on carrying out extensive IEC campaigns, preferably in local dialects, to reach out to the beneficiaries, involving prominent figures and influential persons of the communities.

“We must set up a target to vaccinate all by September-end and strive to become the first state in the country to achieve the milestone,” he said.

“Vaccine doses will be made available to all districts as per need,” the CM said, and asked the district administrations to place their requirements in advance, so that the health department can coordinate with the Centre for procurement of the vaccines.

He further directed the DCs to list out priority projects in their respective districts, which are reviewed and discussed in the e-Pragati meetings, and asked them to visit the project sites and review their progress once a week.