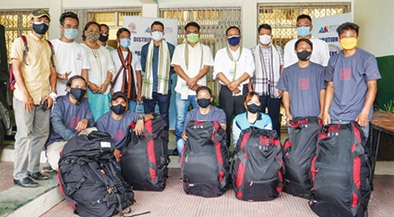 After handing over the paragliders and equipments to the pilots, Tayeng said that the tourism department would always support the PAA in its efforts to develop Arunachal as a destination of adventure tourism “and also encourage new pilots to take up paragliding activities for self-employment.”

Under this flagship scheme, the tourism department

assists unemployed youths of the state with the objectives of self-employment generation and promotion of adventure tourism.

“So far, 20 unemployed youths of the state who have successfully completed paragliding courses have been extended support under this scheme,” informed Tourism Deputy Director (HRD) Bengia Manna Sonam. Tagit Sorang, who scaled Mount Everest recently, was also provided support under the scheme.

PAA president Sonam, who was also present, said that Basar (Leparada), Anini (Dibang Valley), Mechuka (Shi-Yomi), Dambuk (Lower Dibang Valley) and Paya (West Siang) have been found to be feasible for paragliding activities. He requested the tourism department to include paragliding as one of the events in all the adventure festivals sponsored by the department.

Sonam informed that 40 pilots have been trained so far, out of which 20 pilots, including five lady pilots, have availed benefit under the CMPVY.