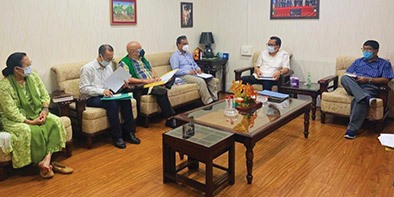 ITANAGAR, 21 Jul: Deputy Chief Minister Chowna Mein asked Secretary Industries Hage Tari to formulate an inter-disciplinary committee by including members from all the line departments in order to correct whatever lacunae in the present Industrial Policy.

Reviewing the Industrial Policy of Arunachal Pradesh with the commissioner and secretaries from Planning & Investment, Industries, Agriculture, Forest and Tax & Excise departments on Wednesday, Mein said that the matters should be viewed in the perspective of the convenience of the industries in order to attract potential investors.

He said that the Industrial Policy needs to be reviewed and updated from time to time as per the latest acts passed by the Government of India and in consonant with the new Industrial Policies of the country to improve the ease of doing business in the State.

Reiterating the huge availability of land bank in the state, Mein asked the Forest and Horticulture departments to formulate a Tea Policy and Horticulture Policy in order to encourage small tea growers and to facilitate the setting up of food processing industries in the state.

He also asked Agriculture Secretary Bidol Tayeng to modify the Wine Policy so as to facilitate marketing of locally produced kiwi wines from the state.  He also asked them to effectively and fruitfully use the young agriculture and allied scientists in the field of research and development.

In the meeting, matters relating to the incorporation of VAT extension in the Industrial Policy as per the Cabinet decision; large scale consumption of power in industries; subsidies for small tea growers; effective implementation of alternate crops for poppy cultivation; forward and backward linkages for Mega Food Park, etc were also discussed.