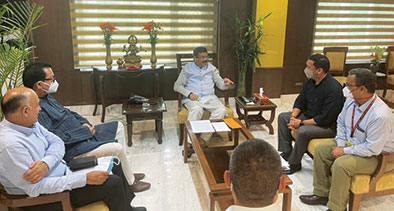 The CM on Tuesday met union Health Minister Mansukh Mandaviya, briefed him on the health scenario of the state, and thanked him for providing adequate vaccines for Arunachal. He said that vaccination drives in the state are being carried out on a war footing.

During their discussion, Khandu also requested for increasing the PG quota for the state.

The union minister on his part assured of all possible support to the state.

Khandu, who is on an official visit to the national capital, called on several union ministers.

He met union Education Minister Dharmendra Pradhan and sought support from the ministry with regard to infrastructure and manpower.

The CM later called on union Rural Development Minister Giriraj Singh and, apprising him of the “huge potential of the state,” urged the ministry to “support in encashing the potential.”

The CM also requested the minister to consider developing the border villages in Arunachal in order to stop migration of the villagers to the urban areas.

Later, the CM called on union Environment, Forest & Climate Change Minister Bhupendra Yadav and apprised him of various forest-related issues of the state.

Both union ministers assured Khandu of all possible support to the state.