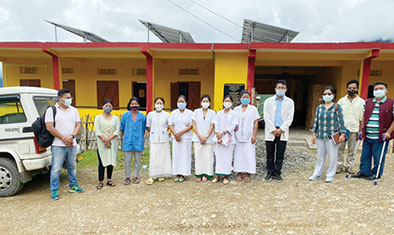 ITANAGAR, 3 Aug: The primary health centre (PHC) in Kamhua Noknu in Pongchau circle of Longding district is functioning smoothly since May this year after the government handed over its upkeep to the Karuna Trust.

The erstwhile non-functional PHC now has two doctors, a health & wellness officer, five nurses, a lab technician, and a male and a female attendant. Tests for common diseases like malaria and typhoid, besides vaccination facility, maternal delivery, Covid tests and other basic facilities have been made available at the PHC.

The PHC is also observing the ongoing National Breastfeeding Week.

Overjoyed that the PHC has been made functional, local residents said that “several people in nearby villages had earlier lost their lives because they could not get treated for common diseases like jaundice, malaria, or typhoid. It was also extremely difficult to transfer people with severe cut injuries due to poor roads. Travelling to hospitals was not even an option for the elderly. They would either have to medicate locally, recover on their own, or simply die due to lack of medical care. Unless someone was severely ill with cancer or TB, they would not travel outside the villages. People died of common and curable diseases. We are hopeful that deaths will now be reduced as more and more people are getting their ailments treated at the PHC.”

They said that “now the villagers of Khakam block do not have to travel around 30 kms for two hours on a half-kutchha deplorable road to Longding headquarters to seek treatment for common diseases, or for checkups, or delivery cases.”

In March this year, the Itanagar permanent bench of the Gauhati High Court had directed the health & family welfare secretary to indicate the timeframe within which the PHC would be made fully functional.

On 9 November, 2020, this daily had reported the maternal death of one Nonsai Pansa, who had passed away on 5 November, 2020. The villagers had claimed that the death occurred because of the poor condition of the road and the absence of doctors and nurses at the PHC.

The villagers had also claimed that other pregnant women from the village had died previously due to the lack of medical facilities.

The PHC was inaugurated by the chief minister via videoconference from Longding headquarters on 4 December, 2018, but had been lying defunct and serving as a shed for stray cattle.