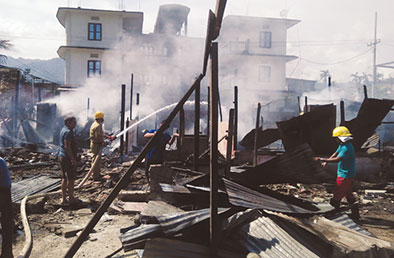 DOIMUKH, 3 Aug: A house was completely destroyed in a fire accident which occurred at Huto village near the ‘Saturday market’ here in Papum Pare district at around 12:30 pm on Tuesday.

The house belonged to one Pawan Dhan, whose entire belongings were reduced to ashes. However, no casualty was reported.

The victim’s neighbours reportedly managed to salvage a car from the burning house.

Naharlagun Fire Station OC Tame Budh informed that the fire station had received a call from the Doimukh police station at 12:30 pm, but due to traffic congestion and poor road condition, the fire tender managed to reach the spot at 1 pm. By then, the fire had already engulfed the building.

“The cause of the fire is suspected to be electric short-circuit. However, investigation is still on,” Budh said.