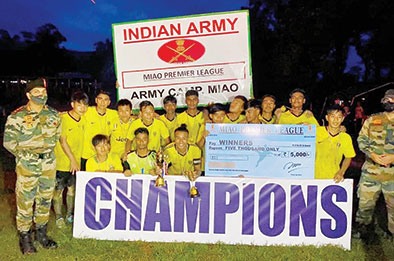 MIAO, 24 Aug: The Lekhapani battalion of the Red Shield division of the Indian Army organized a football tournament, the Miao Premier League, for boys under 21 years, commemorating the 50th anniversary of the victory in the 1971 Indo-Pak war.

The UMFC Jr team representing Miao won the tournament, beating 4-A FC of Namchik 11-10 via penalty shootout in a highly contested final match played on 23 August here in Changlang district.

The winner and the runners-up teams were awarded medals along with trophies and cash prizes.

The tournament was organized with the aim of motivating the youths to opt for physical fitness and sportsmanship and to develop their interest in competitive sports by providing them a platform to showcase their talents.

The army assured the people of continued cooperation in promoting sports and team spirit in the area.