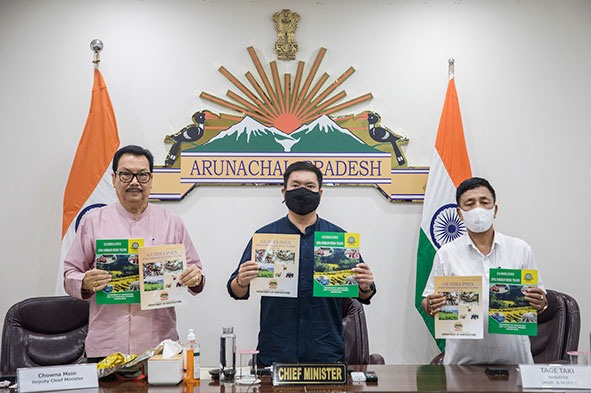 The schemes are part of the Atmanirbhar programme announced during the budget session held in February this year. A total amount of Rs 120 crores – Rs 60 crores for each scheme – has been allocated to the agriculture and horticulture departments.

Lauding the two departments and the banks for coming with proper guidelines of the schemes to benefit farmers and self-help groups (SHG) across the state, Khandu appealed to all to get in touch with their respective district administrations to get the details and avail the schemes.

He informed that no land document like land possession certificate (LPC) will be required for SHGs availing the schemes. A simple certificate from the EAC, CO or BDO concerned will serve the purpose.

Also, there will be no collateral (guarantee or mortgage) in respect of individual schemes up to Rs 1.60 lakh. For SHGs, collateral will not be required for loans up to Rs 10 lakhs.

“The best part is that the components of the schemes will be 45 percent government subsidy, 45 percent bank loan, and only 10 percent will have to be borne by the farmer,” informed Khandu.

He expressed optimism that the schemes would be beneficial to about 3,700 SHGs of the state which have women members in majority.

Stressing on timely implementation of the schemes as farming is dependent on seasons, the chief minister asked the implementing agencies not to wait for the last dates set up for processes like selection of beneficiaries, etc.

The department has set September month as the time period for final selection of beneficiaries.

“As per official records, we have almost 25 lakh hectares of cultivable land available, but unfortunately, we are using only 3.5 lakh hectares at the moment. We need to utilize our land bank optimally for our state to become self-reliant,” he said.

The Bagwani Yojana is for cultivation of fruits like apple, kiwi, orange, arecanut, walnut and persimmon, while the Krishi Yojana will deal with scientific land terracing, tea and rubber, double-cropping, farm mechanization, FPO, cultivation of buckwheat, O-bollu, apiculture, etc.

The guidelines for implementation of the schemes have been prepared by the NABCONS, the consultant agency of the NABARD.

Expressing gratitude to the banks and the NABARD, Khandu said that, under the present government at the Centre, “the agri-horti sector is getting a push never seen before,” especially in the Northeast.

“Recently, the union cabinet revived the North East Regional Marketing Corporation, which will be handholding the NE states in marketing their products. Also, the Centre has re-launched the Oil Palm Mission in the region with an amount of Rs 11,040 crores for five years,” he informed.

The oil palm programme had been implemented in the state a few years back but it could not succeed. About 4,000 hectares of oil palm trees were cultivated, but the promoters failed to establish their factories, resulting in loss to the farmers. Khandu said that the incentives this time have been doubled to make it viable for promoters.

“We are in touch with some of the promoters and we target to cultivate at least 15,000 hectares this year,” he said.

He called upon the deputy commissioners, especially of the foothill areas, who were virtually connected to the programme, to study the feasibility of oil palm cultivation in their districts.

The chief minister revealed that he has offered to host the proposed regional level oil palm business summit in Namsai “anytime soon.” Besides attracting investors, he said, the summit would also educate the farmers of the state.

Meanwhile, MoU were signed between the state government and the SBI, the Apex Bank and the APRB. (CM’s PR Cell)