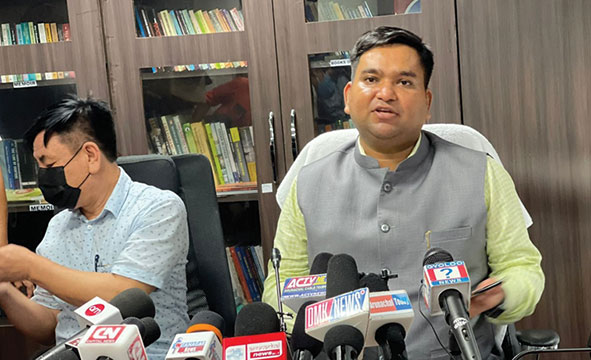 With this, three persons have so far been arrested in connection with the Seppa-Chayang Tajo NEC road scam. Earlier, Nacho PWD Division Executive Engineer (EE) Tare Murtem was arrested in the intervening night of 5 and 6 September.

Addressing a press briefing, SIC SP Hemant Tiwari informed that Jini and Babu were arrested at the SIC police station in Itanagar after being summoned for interrogation. Both will be produced before the special judge in Bomdila on Wednesday, the SP informed.

Tiwari added that another accused, whose involvement in the case has been established, is the incumbent Chayang Tajo PWD Division EE Nyakpu Yangfo.

“The SIC is looking for one more accused involved, whose role has been established. There may be others also, but as of now, the fourth one, who is at large, is Nyakpu Yangfo. He is currently posted as executive engineer, Chayang Tajo PWD division. Earlier, he was posted as assistant engineer of the Seppa-Chayang Tajo division. He was supervising the entire works and I believe that at that time no executive engineer was there and he was having DDO power” the SP said.

“Yangfo is at large. He has approached the Itanagar bench of the Gauhati High Court for interim relief and pre-arrest bail. Honourable high court has rejected the pre-arrest bail,” he said, and appealed to the public to share information about the absconding engineer.

He further disclosed that it took the SIC five months to digitize the documents and scan and examine the documents, and that, after extensive examination during the course of investigation, the team decided to arrest the persons whose involvement has been established.

The SIC SP said that the roles of Gammon India Pvt Ltd and DRB Infrastructure Pvt Ltd are also under the scanner. However, he refused to disclose the incriminating evidences against the arrested persons and the Chayang Tajo PWD EE.

Denying that there is any political pressure to go lenient and soft on the alleged accused, the SP said that the SIC took up the case at the highest level. “It was discussed and the instructions are large and clear that no innocent should be harassed but someone who has done wrong, no leniency towards that person,” the SP said.

The SIC earlier conducted a preliminary inquiry into the allegation of misappropriation of funds by Gammon India in the construction of the road, and registered the matter as a regular case (u/s 120 (B)/420/465/471/409 IPC, r/w Section 13 (1) HO (d) & 13 (2) PC Act, 1988). This came after social activist Payi Gyadi had lodged an FIR against the EEs of the Chayang Tajo PWD division and executing agencies Gammon India Ltd, Gammon Engineers Contractors Pvt Ltd and DRB Infrastructure Pvt Ltd on 7 August, 2019.

The complaint mentions the names of the then and the present engineers of the Chayang Tajo PWD division and other private individuals: Gammon India Ltd, Mumbai; Gammon Engineers Contractors Pvt Ltd, Mumbai; and DRB Infrastructure PM Ltd, Hyderabad.