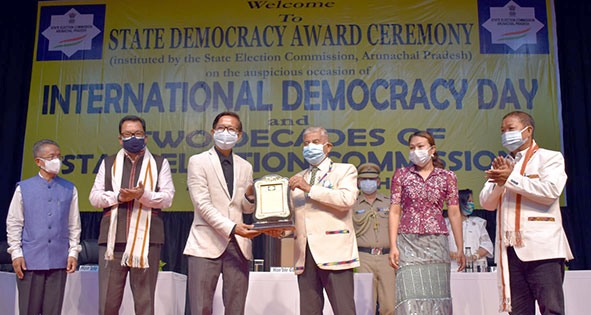 The State Election Commission also recognized and awarded officials and individuals for their services during elections.

the next year’s budget for the same which would become an important asset of the state.

“The state government is committed to protect and uphold the democratic values as enshrined in the Constitution of India,” he said.

Mein also highlighted the evolution of the political process in Arunachal Pradesh. He narrated the history of the state’s political journey from the time when the British-India Government started to define the administrative jurisdiction by drawing an inner line in relation to the frontier tribes inhabiting the North Frontier Tract in the year 1875 to the formation of statehood in the year 1987.

He also narrated the history of the introduction of the Panchayati Raj System in the year 1969 with the recommendation of the Daying Ering Committee and the evolution of the State Legislative Assembly from the Agency Council.

On the series of reformations for betterment, he highlighted the one of the significant reformations in the electoral process in India during the time of former Chief Election Commissioner of India, late TN Seshan, with the introduction of photo identity card, which he said “has helped to streamline the electoral roll and had helped to do away with bogus voting and duplicity in the voter lists.”

He commended the awardees of the State Democracy Awards for their outstanding contribution for the smooth conduct of the simultaneous elections of the Panchyati Raj and Municipal Corporation despite many challenges, including Covid-19 pandemic.

He also remembered the contribution of former members of the State Election Commission for their contribution in the electoral reforms and in smooth conduction of elections over the years.

Referring to Article 21 (3) of the Universal Declaration of human rights, he said that “the elections, by universal suffrage, free, fair and secret voting are the foundations of democracy.”

Complimenting the State Election Commission for conducting free, fair and transparent elections, the governor called for strict discharge of seven golden obligations by the government officials to the public, viz, transparency, accountability, probity, promptness, equal dispensation, audit, mid course correction when and where so ever needed. He emphasised upon the importance of all round public consciousness and sense of democratic responsibility.

A commemorative compendium, titled ‘Two Decades of State Election Commission’ along with its software disk was also released on the occasion.