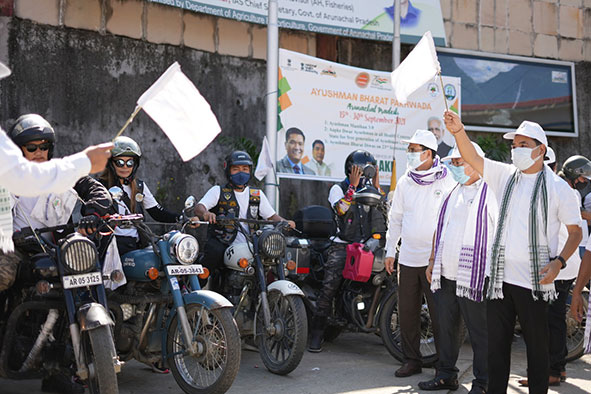 ITANAGAR, 15 Sep: Health Minister Alo Libang flagged off an awareness motorbike rally from here at the Civil Secretariat to mark the launch of Ayushman Bharat Pakhwada on Wednesday.

Organized by the state health agency (SHA), the Ayushman Bharat Pakhwada is a fortnight of enhancing awareness about the Ayushmaan Bharat Yojana and Pradhan Mantri Jan Arogya Yojana (AB-PMJAY)-the salient features of its twin pillars and the benefits that can be availed of under the schemes.

Aapke Dwar Ayushman will be conducted in every district of the state in order to reach out to nooks and corners of the state throughout the days of the Pakhwada (fortnight).

The members of Arunachal Bullet Club, The Gliding Piranhas MC 30° North Aalo and Royal Arunachal Riders took part in the awareness ride which culminated at the CMAAY office, Naharlagun.

Libang was hopeful that the campaign will help generate awareness about AB-PMJAY in the state.

“It is going to be three years since this scheme was launched. The government wants to cover the maximum number of people identified to avail the benefits of this scheme,” he said and thanked the riders for being part of the initiative to create awareness on AB-PMJAY and CMAAY.

“It has received wide accolades across the world and is immensely benefiting the people. We should work to cover the maximum population under this scheme,” he said.

The CEO of Chief Minister Arogya Arunachal Yojna (CMAAY), Dr Nabam Peter informed that AB-PMJAY is a flagship health insurance scheme of the government of India. “This is an entitled based scheme and beneficiaries have been identified through Economic and Caste Census, 2011. In Arunachal 88,928 families have been covered under this to date,” said Dr Peter.

He also shared that 23,000 hospitals have been empanelled under the PMJAY across India. The beneficiaries can avail cashless treatment up to Rs 5 lakh under this scheme.

Regarding CMAAY, Dr Peter informed that 62 hospitals have been empanelled. “This includes 27 hospitals outside the state, including the likes of CMC Vellore, Hyatt, NEIGRIHMS, GNRC etc. We are also negotiating with Tata Memorial Hospital, Mumbai and Rajiv Gandhi Cancer Institute, Delhi to get them under the coverage of CMAAY,” he said.