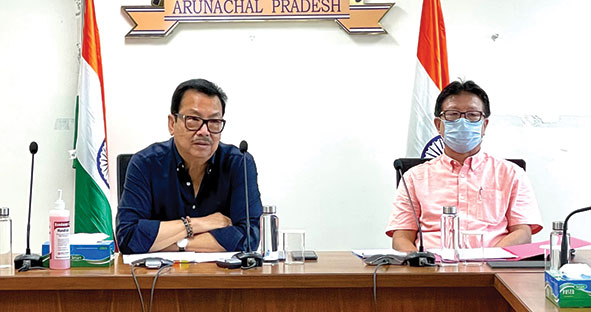 ITANAGAR, 20 Sep: Deputy Chief Minister Chowna Mein asked the members of the sub-committee for recognition of the ‘Unsung Heroes’ to conduct a thorough and extensive research, citing that it will remain an important record/ document for future reference which would also be included in the text books in near future.

He also asked them to make wide consultations with every community and to see that no war heroes are left out.

Mein was chairing a joint committee meeting of the core committee and sub-committee for recognition of the ‘Unsung Heroes’ at the CS’ conference hall in the Civil Secretariat on Monday.

Mein in his remarks said that the sub-committee has been given a big responsibility to re-write the history of Arunachal Pradesh in the local context.

He said that “our fathers and grand-fathers have defied British rule and fought with them as long ago as 1839, even before the freedom struggle started in the country. Most of the history or records are available in the archives of the British libraries or national libraries, but most of them are written by the British and the foreign missionaries in their own context. Now, we need to write them in the local context of Arunachal Pradesh based on the original records and documents.”

He further said to conduct the research work in two phases, with the first phase for collection of documents and submission of substantial documents by June 2022 for the celebration of ‘Azadi Ka Amrit Mahotsav’ on 15th August, 2022. The second phase may continue up to one or two years which may involve compilation in book form and publication of books.

He, however, said that “we must not mix recognition of the unsung heroes with the golden jubilee celebration of attainment of Arunachal Pradesh (naming of Arunachal Pradesh from NEFA),” which will be celebrated on 20th January, 2022 onwards, for which a separate committee had been formed.

The deputy chief minister also assured to provide funds for the research and documentation works, and provided Rs 10 lakhs in cash from his own sources to initiate the work and for purchase of equipment.

Minister of Education and Cultural Affairs Taba Tedir said to “concentrate on the pre-independence era and re-write the history from our own perspective and bring it to the records in the form of books.”

He said that efforts are on to include culture and history of Arunachal Pradesh in the school textbooks. “The books which would come out from the present research work can be included in the college and universities in the future,” he said.

He informed that late Matmur Jamoh and late Moje Riba have been officially recognized by the government. He also informed that the golden jubilee celebration of Arunachal Pradesh will be celebrated for a month from 20th January to 20th February, 2022 where he is also a member of the celebration committee. He said that during the celebration, political heroes of the post-independence period and all the pioneers who had contributed in the development of Arunachal Pradesh will be remembered and honoured.

Advisor to the chief minister, Tai Tagak suggested erection of a war memorial and museum in honour of the war heroes. He added that the books brought out must be legally referable and it should remain a book of reference for colleges and universities. He also said that the outcome of the research work should be a foundation for the history of Arunachal Pradesh.