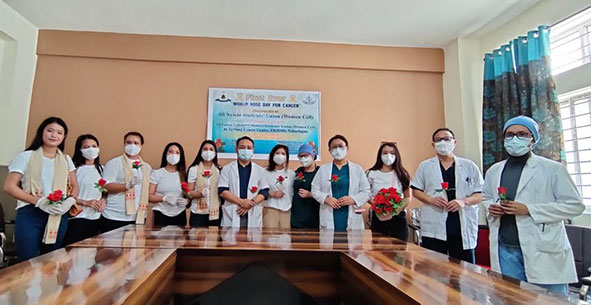 Tertiary Cancer Centre (TCC) Nodal Officer Dr Sam Tsering informed that as per the National Centre for Disease Informatics and Research (NCDIR) in Bangalore, Papumpare district recorded the highest incidence of cancers of stomach, liver, cervix, thyroid and ovary in the country.

of male cancers in the country,” Dr Tsering said.

World Rose Day for cancer patients is observed in honour of Melinda Rose, a Canadian girl, who was diagnosed with a rare type of cancer when she was just 12 years old. Despite having only a few more weeks to live, her undying spirit, courage and hope, is remembered by all. Her kindness and hope in such difficult times of her life worked as an inspiration for World Rose Day.

The ANSU women wing, led by its general secretary Joram Minu and ALSDSU women cell, led by its vice president Khoda Yallam, later distributed roses and fruits to all the cancer patients and interacted with the patients and wished them a speedy recovery.