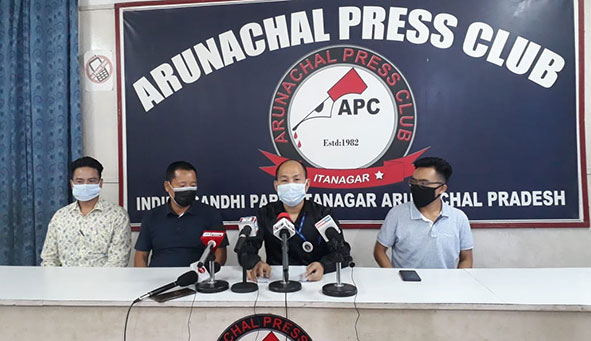 ITANAGAR, 22 Sep: Taking cognizance of the viral video, wherein a consumer identified as Tadar Kaming alleged of being served stale food at the Mughal Garden restaurant here in Niti Vihar on 7 September, the Consumer Rights Organisation (CRO) Arunachal Pradesh on Wednesday informed that it has lodged an FIR against the restaurant manager for violating the Food Safety and Standards (FSS Act) and Consumer Rights Act.

In a press conference held here at the Arunachal Press Club on Wednesday, CRO-AP president Achu Bagang said that the CRO had received a complaint letter from Tadar on 8 September

claiming that the restaurant had served him “cold and stale food, resulting in food poisoning.”

On 9 September, the CRO took the matter to the designated food safety officer to investigate the matter and subsequently, it served a show-cause notice to Mughal Garden restaurant seeking clarification, the CRO president said.

“On the basis of the CRO show-cause notice to Mughal Garden, the food safety department had imposed a penalty of Rs 5000 against the restaurant under the FSS Act,” he informed, adding that the FIR was lodged with the Niti Vihar police station against the manager and a case was registered under section 273/ 336/ 337/ 34 IPC and the matter is under investigation.

Bagang further appealed to the people of Arunachal Pradesh to report such cases to the CRO AP and the concerned department.

He said that that the CRO is committed to working towards food safety and consumer rights, besides creating awareness on consumer rights in the state.