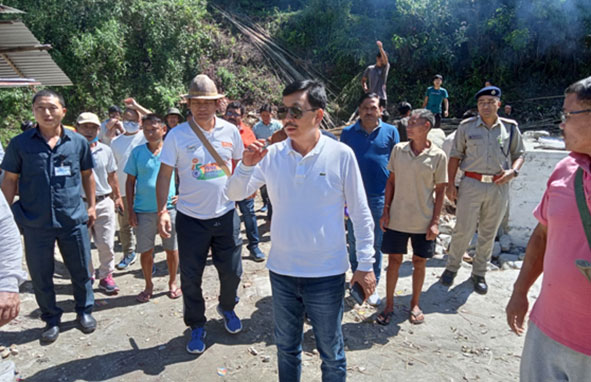 ‘RCC bridge over Subbung river within a year: Tasing’

BOLENG, 22 Sep: Member of Parliament Tapir Gao, accompanied by MLA Ojing Tasing on Wednesday visited the flood-affected areas in Subbung and urged the department concerned to prepare the flood damage report and submit it to the state government immediately.

Gao said that he will give priority to the construction of an RCC bridge over Subbung river as well as restoration of the Subbung hydroelectric plant.

The MP provided Rs 1 lakh to the village committee, which constructed a temporary hanging bridge over Subbung river and Rs 50,000 for the GBs of Doggong Banggo from his local area development fund.

Flash-flood triggered by heavy rain had washed the Bailey bridge over the river on 26 August. It also caused heavy damage to the Subbung hydroelectric plant.

Tasing assured the villagers of constructing an RCC bridge over Subbung will within a year. He said that preliminary works, such as the design of the bridge are being prepared. The MLA urged Gao to patronize the construction and restoration of the proposed RCC bridge and the Subbung hydel plant.

He also said that relief must be distributed to the affected families without any discrimination.

ZPC Osi Mibang urged the Rumgong and Pangin-Boleng MLAs and Gao to take up the matter of restoration of the hydel plant and construction of the bridge over Subbung river with the chief minister and the deputy chief minister on top priority.

ADC (HQs) Gyabo Pertin advised the flood-affected people to provide proper and correct information about the properties lost or damaged in the flood to the department concerned.

The MP and the MLA were also accompanied by the ZPMs, senior public leaders and the HoDs. (DIPRO)