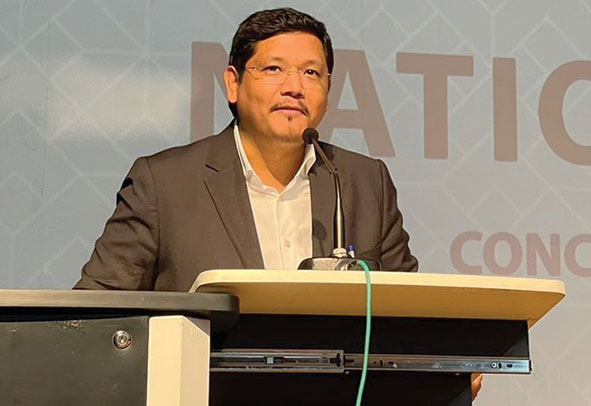 ITANAGAR, 19 Oct: Meghalaya Chief Minister Conrad Sangma on Tuesday said that dialogue and deliberation are the only way out to resolve longstanding differences, including the interstate boundary issues, among the Northeast states.

“We often harden our stand without knowing the issue. We should be able to differentiate between stand and issue,” Sangma said, addressing the National People’s Party’s conclave themed ‘Regional aspiration, national outlook’ at the DK convention hall here.

“Our stand is not important but the issue is, for a regional aspiration. We should come out from position-minded stand and rather take an issue-based stand. I believe fifty to sixty percent issues can be resolved, including the Assam-Arunachal boundary issue,” the NPP chief said.

He observed that most of the issues in the Northeast are economy-related, and that the region needs an economic agenda and needs to start deliberation on economy-related issues.

“There are multiple ways to do it, but we don’t explore them,” he said, and described economy-related issues as the main factor behind many issues in the region, including illegal immigration.

Sangma also opined that the Northeast needs to have a common agenda on climate change and international trade.

He clarified that the objective of the conclave was to ignite discussions and create buzz over important issues.

“We are not here to give you every solution to everything. There is no correct solution to the challenges and the issues we have been facing for years and years,” he said.

Sangma further said that “misconception on regional and nationalism needs to be reduced.”

“Somehow, perception is given that if you are regional you are antinational, and if you are national you are anti-regional. This misconception we slowly want to reduce the confusion. I believe that if we deliberate over this issue, these both can go along,” he said, citing the example of using Hindi language.

“Sometimes, when we take a national stand, people think we are against our own people. For example, we had a discussion on Hindi. Learning Hindi is not a bad idea. If our children can learn Spanish and Italian, why can’t we learn Hindi?” Sangma said.

The head of Tripura’s royal family and chairperson of the Tipraha Indigenous Progressive Regional Alliance, Pradyot Kishore Manikya Debbarma accused national parties like the BJP and the Congress of “indulging in divide and rule policy in the northeastern region.”

Debbarma, who also addressed the conclave, said that the people of the NE states need to trust regional parties more than national parties.

He also urged people not to fall for the divisive politics of national parties.

“Lack of unity has hurt our political aspirations at national level. This needs to change if NE states are to progress in true sense,” he added.

Dwelling on the experience of how the indigenous tribal communities have been reduced to minorities in his home state of Tripura, he asked other states to remain vigilant. “We feel sad for minorities who come to India as refugees from countries like Bangladesh. But why should they be settled only in NE states? Let them be settled in Gujarat, UP, etc. Today, we indigenous people have become a minority in Tripura due to the influx of foreigners from Bangladesh,” he said.

Sangeeta Barooah Pisharoty, national affairs editor of ‘The Wire’ in her address alleged that Delhi-based national parties do not allow the growth of regional parties.

“Regional parties act as a pressure group and represent regional aspirations. On the other hand, national parties can be easily controlled from Delhi. The need for regional parties has grown in the NE region,” she said.

Lurinjyoti Gogoi, president of the Asom Jatiya Parishad, an Assam-based regional party, in his address alleged that successive governments in Delhi have done grave injustice to the people of the NE states.

“The programmes and policies for us are made without consulting us by people sitting in Delhi. They hardly know about the ground realities of the region. We need to fight back and reclaim our rights,” said Gogoi.

He also accused the BJP of destroying the culture and history of Assam. “Today, the BJP is polarizing people on religious lines and destroying social fabric. We are committed to fight against illegal migrants whether he or she is Hindu or Muslim. Assam cannot be allowed to be a dumping ground for foreigners,” he said.

He further alleged that “the BJP is running a fascist agenda.”

“Their attempt to impose one nation, one religion, one language is a big threat. This autocratic mindset should be strongly resisted,” he added.