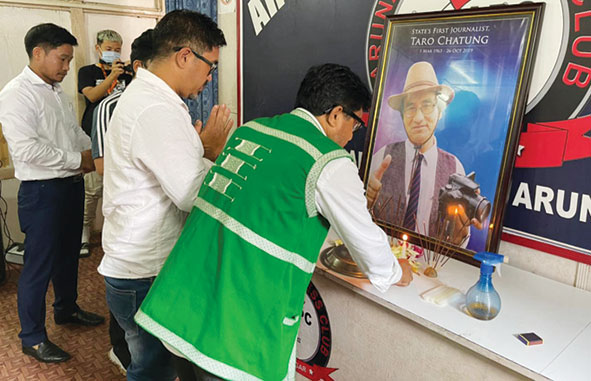 Chatung, the pioneer of electronic media in the state and a state gold medal awardee, passed away on 26 October, 2019, after being diagnosed with cancer, at TRIHMS, Naharlagun.

Highlighting Chatung’s contribution to the state’s media, APC President Dodum Yangfo appealed to the young journalists to draw inspiration from the life of Chatung.

“Asking straight questions and being rational in reporting were the best journalistic approaches which Taro Chatung had within him during his entire life. We should imbibe his qualities and pass them on to the next generation of journalists,” he said.

Yangfo also said that one does not require a journalism degree to become a journalist, “but one should have the basic knowledge of media ethics.” He added that “language and accent should never be a barrier in reporting, especially in the present era of digitalization.”

The APC president also appealed to the state government to provide a job to a member of late Chatung’s family at the earliest. It is one of the requests that the state’s media fraternity has been following up with the government for the last two years.

Motivating the young journalists of the state to carry forward the legacy of Chatung, APUWJ President Amar Sangno said that “a journalist should be dedicated and passionate towards his profession.”

He said that Chatung “was and will always be an inspiration to many of the journalists.”

Advisor to APC, Taba Ajum said that “a journalist should be passionate, humble and also be able to connect with people from various walks of life, like Taro Chatung, to create sources and accordingly bring out better news stories.”

A two-minute silence was observed as a mark of respect to the ‘father of the state’s media’.