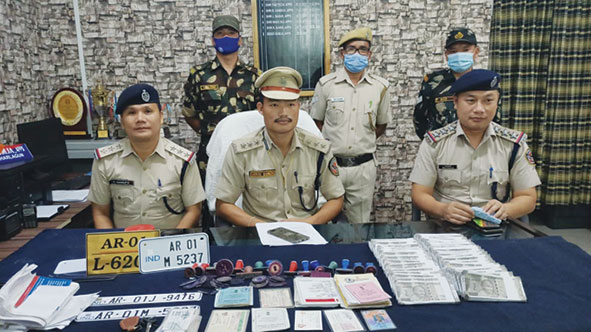 ITANAGAR, 26 Oct: Itanagar Capital Region Superintendent of Police Jimmy Chiram on Tuesday informed that the capital police have busted an interstate racket of distributing fake currency notes with the arrest of one person.

The SP informed about this while briefing media persons at the Naharlagun police station (PS).

“The police have recovered 40 bundles of fake currency notes having a value of Rs 20 lakhs, in denominations of Rs 500, from the accused. The amount has been seized from the accused in the presence of independent witnesses,” he said.

The accused, identified as Ashudin Islam (24), a resident of Islampur-I, Bangalmara, Assam, is now in police custody.

The arrest was made when the accused, along with one Rashidul Islam and one Ramzan Ali, arrived in Banderdewa to hand over Rs 20 lakhs in fake notes to one ‘Madam Ji’, in exchange for Rs 6 lakhs in original notes.

The police arrested Ashudin Islam, but the other two managed to run away.

On 22 October, the police received a tip-off from NGO Indigenous Movement against Corruption and Reformation that a few individuals were moving about in Banderdewa area with fake Indian currency notes and trying to circulate them.

A team of the Banderdewa PS, along with the NGO’s volunteers, under the supervision of the SP, the Naharlagun SDPO and the Banderdewa PS OC, began investigating the case and subsequently arrested the accused.

During interrogation, it was learnt that the gang takes one original currency note and creates three coloured photocopies of it, thereby making three more notes bearing the serial number of the original note. Later, they pack and seal the fake notes to make them appear like original notes and deliver the same to persons in exchange for original notes.

The gang’s members contact people across the state through fake Facebook profiles and send pictures and videos of printing fake notes. They even invited interested persons to inspect the fake note printing machines.

At first, the gang’s members give people real notes to convince them, and when the customers are fully convinced, they cheat them with fake currency notes.

The accused also revealed that two Arunachalees, identified as Perum and K Rapung, have been cheated out of Rs 80,000 and Rs 4.70 lakhs, respectively. Likewise, the gang cheated several people across the states of Bihar, Assam and Nagaland.

“Fake currency is a serious threat to our economy, and such offences should not happen,” the SP said, and appealed to the business community to be careful while accepting notes, especially at times when they are vulnerable.