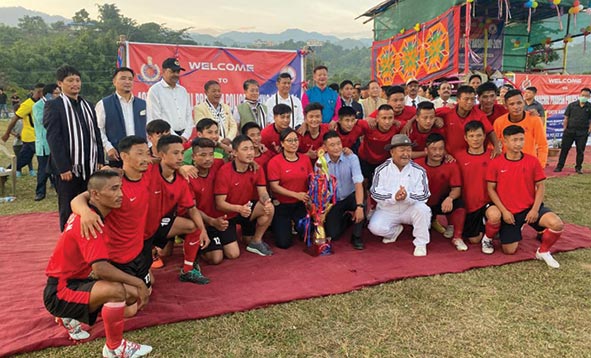 CHIMPU, 7 Nov: The team of the 4th Indian Reserve Battalion (IRBn) won the football championship title in the games and sports competitions organized as part of the 49th raising day of the Arunachal Pradesh Police (APP).

They beat the 3rd IRBn team 4-1 in a penalty shootout at the AAPBn ground here on Sunday. The match went to tie-breaker after both sides played out a goalless draw in the regulation and extra-time.

The veteran (45+) singles title was won by DSP N Sora. He beat HC B Grayu in the final.

DSP Sora and DSP Kolom Pait beat the duo of HC B Grayu and HC B Lokam in the final to win the veteran (45+) doubles event.

In small arm firing, Ct Pallav Pathori won the first position, while Ct A Wangsu finished in the second position.

In the rifle firing/shooting, Ct A Bellai won the first position, while L/Ct M Muang won the second position.

IGP Apur Bitin, who is also the vice president of the police sports control board, also spoke.

The sports meet was organized by the APPSCB from 1 October.

Brahmaputra Board begins survey for anti-erosion project at Remi river