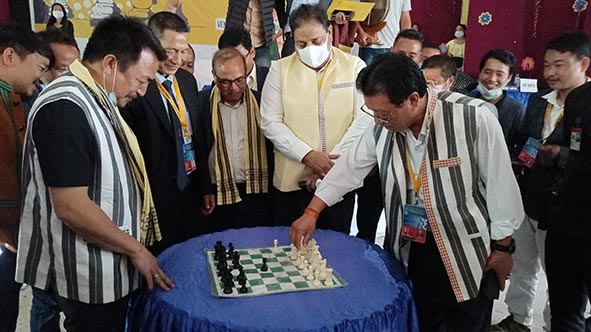 The tournament was inaugurated by Education Minister Taba Tedir, who is also the president of the Arunachal Olympic Association.

The tournament, which is being conducted at Siddhartha Hall here, will conclude on 11 November, and is being organized by the All Arunachal Pradesh Chess Association (AAPCA).

Tedir lauded the AAPCA for organizing the event in a massive way. Terming chess “a game of brain,” Tedir said that “chess will enhance the knowledge and power of the brain and mental value among the upcoming players and youths of the state.”

Referring to the state government’s commitment to keeping a quota for meritorious sportspersons in government departments, Tedir said, “This opportunity should be availed only by real achievers,” and expressed sadness over recent reports of people misusing the sports quota.

AAPSU vice president Meje Taku, who also attended the function, lauded the AAPCA for successfully organizing the last four championships, and also for ensuring massive participation in the tournament this year. He asked the state government to give more attention to the education sector, and demanded immediate functioning of the state’s own university in Pasighat in East Siang district.

All India Chess Federation honorary secretary Bharat Singh Chauhan in his address assured to provide all support for the promotion of chess in the state. He urged the state government to introduce chess in schools, and assured to support trainers in this regard.