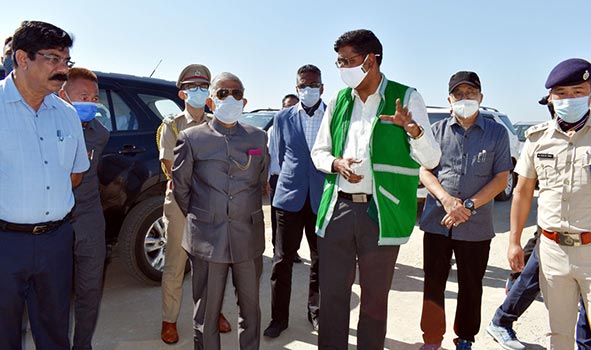 He inspected the runway and interacted with the workers and the supervisors.

Later, during a meeting, the governor was apprised of the critical areas which need to be completed within a timeframe to ensure that the first aircraft lands at the greenfield airport on 15 August, 2022.

Mishra reviewed the progress of the runway, the air traffic control system, the departure and arrival lounges, security, power and water supplies, etc, with the officials concerned during the meeting. He also took up the matter of intermediate

arrangements vis-à-vis various buildings which may take a longer time to be completed.

“There is a maximum of five months of rain-free period available for progressing the work, and it should be utilized to the optimum,” he said, and asked those involved in the airport’s construction, particularly the representatives of the Airports Authority of India (AAI), to “work on a mission mode and in tandem, involving all departments concerned.”

While emphasizing on ensuring quality work, the governor suggested preparing “monthly progress chart of every activity or work for the clearance of bottlenecks.”

He asked the police department to start the selection and training of policemen in advance for security duties at the airport.