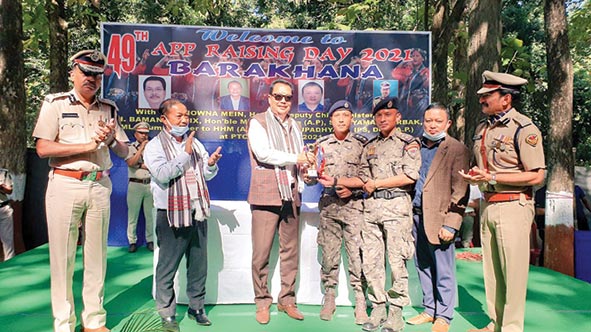 Attending the celebration, Deputy Chief Minister Chowna Mein laid a wreath at the Martyr’s Pillar to pay tribute to the police personnel martyred in the line of duty. He also inspected the parade contingents on the ground, which was followed by ceremonial march past.

Addressing the gathering, the DCM said that the state government aims to upgrade the capacity of the police department and its personnel, adding that “providing essential services to the length and breadth of the state has been a priority.”

Lauding the police department for performing exceedingly well in executing its responsibilities, Mein informed that in the last one year alone, 10 new police stations have been inaugurated and more than six police station buildings have been upgraded.

“Besides this, many new outpost buildings and check gates have also been inaugurated in the previous one year alone,” he said.

The DCM also informed that more fire stations and substations are being set up across the state. “In the last year, two such stations have been set up, and more are being contemplated,” he said, adding that the State Disaster Response Force is also being strengthened “and one such company of 60 personnel is already in place.”

In order to promote police welfare, he said, a Rs 100-crore special package has been sanctioned for construction of residential quarters for the police personnel serving in far-flung areas of the state.

“The current government has been tough on combating insurgency in the TCL areas and as a result, over 137 insurgents have been apprehended or have surrendered in this year alone,” the DCM said, adding that the police have also been directed to be tough on combating narcotics in the state.

“Thousands of acres of illicit poppy cultivation have been destroyed, 249 cases have been registered and 470 persons have been arrested. These are all focus areas to bring peace, stability and prosperity to the state and its people,” he said.

Mein gave assurance that he would raise the matter of infrastructural and other requirements of the APP with the chief minister.

Later, the DCM handed over the DGP’s Commendation Disc awards for the year 2021 to 30 police officers and personnel in recognition of their excellent performance, dedication and devotion towards their duties.

The awards were given away in the presence of Home Minister Bamang Felix, MLAs Chau Zingnu Namchoom, Nyamar Karbak, Tana Hali Tara, Laisam Simai, Kardo Nyigyor and Jikke Tako, and senior officers and officials of the police department.

Earlier, DGP RP Upadhyaya dwelt on the history and growth of the APP since the recruitment of its first batch in 1972.

Later, the DCM inaugurated an NGO mess at the PTC and visited the exhibition stalls put up at VKV Banderdewa.

Other highlights of the occasion included hoisting of the APP flag by the DGP and demonstration of an anti-riot drill. (DCM’s PR Cell & DIPR)