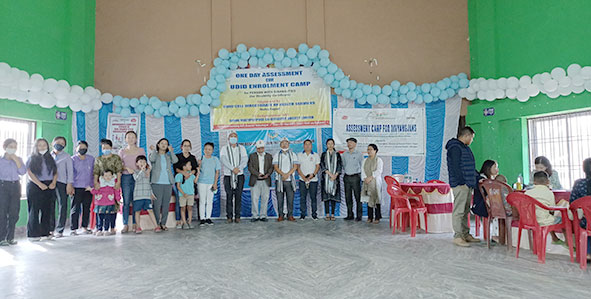 NAHARLAGUN, 15 Nov: An assessment camp was organized for the divyangjans of the Itanagar Capital Region (ICR) by the SJETA department, in collaboration with the health department and the Ayang Multipurpose Cooperative Society Limited as part of the Azadi Ka Amrit Mahotsav at Techi Takar community hall here on Monday.

During the camp, SJETA state coordinator for unique disabilities identification (UDID), Gomkek Yoka said, “The central government has implemented a unique identification system through registration of the beneficiaries under the UDID scheme by which the divyangjans can avail benefits of various central and state government schemes, including scholarship for students.”

Yoka further said that the UDID scheme has been launched across the state and the SJETA and the health departments have been conducting several outreach camps in various parts of the state.

“There are lots of benefits of the UDID. It will serve as a beneficiary card which is valid across the country. One can avail travelling concession, government job reservation, get disability kits, disability pension and many more after getting registered online or through offline mode by providing identification documents like Aadhaar card, driving licence, PAN card, etc. The scheme was launched in 2017 and as of now, we have data of around 2,907, of which 1,844 disability cards have been generated. We have covered many districts and still more needs to be done,” he informed.

He further stated that financial support is also extended to NGOs like the DPHS, Oju Mission, Deepak Nabam, etc.

Also present at the camp was Arunachal Pradesh Parents Association for Disabilities president Tagom Ronya, who emphasized the need for creating more such awareness camps across the state, and urged the SJETA department to empower the state’s children with disabilities by providing them with all privileges and opportunities.