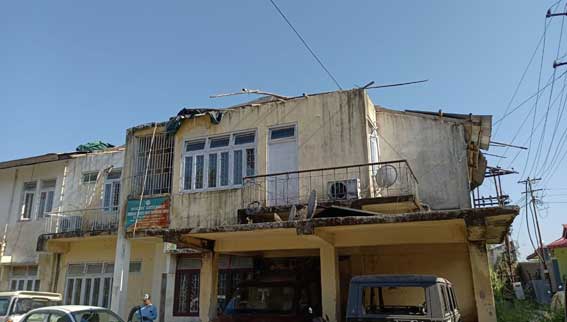 CHIMPU, 18 Nov: The dilapidated condition of the office of the Arunachal Pradesh Forest Corporation Limited (APFCL) has made life miserable for the staffers attending the office.

Despite several complaints raised by the staff, the office is yet to be repaired. “It becomes difficult to work during monsoon. Rain pours inside the office,” said an official.

Meanwhile, Environment & Forest Minister Mama Natung said that he is aware of the situation. “I personally visited and inspected the damage caused. A DPR has been prepared and the government is considering the proposal. It may take some time but will definitely be taken care of,” said Natung.

APFCL Chairman Talo Mugli informed that the condition of the office is bad. “The office cannot run in such an atmosphere. The situation is very bad. The matter has been raised at the highest level,” he said.

APFCL Managing Director T Gapak said that the dilapidated condition of the building is having a discouraging effect on the employees, and expressed hope that the government would consider the proposal for repairing it.