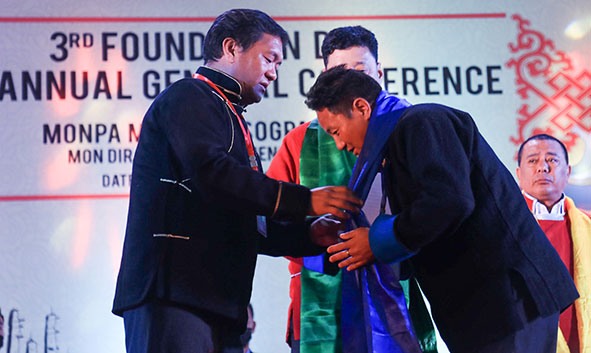 DIRANG, 19 Nov: Chief Minister Pema Khandu said that reforms are required in the system with the changing times and the society should be able to accept the changes.

He said that governance in Arunachal Pradesh was always in able hands but the “old style of working” had eaten into the system and hampered development while inviting corruption.

“Reforms, though they may appear harsh, are the need of the day,” he said.

One reform he cited was the establishment of the Staff Selection Board (SSB) for recruitment of clerical and equivalent posts in the government.

“Earlier, such posts were recruited as and when desired by departments and offices concerned on their own. This gave way for corruption in the process and unfair selection of candidates that deprived the deserving,” Khandu said on the concluding day of the third foundation day celebration of the Monpa Mimang Tsogpa (MMT) here in West Kameng district on Friday.

The CM said that community-based organizations like the MMT (the apex community organization of the Monpas) should evaluate the reforms brought in by the state government and educate the people.

He said that the SSB, along with the state public service commission, is conducting all recruitments in a fair and transparent manner.

The chief minister advised the MMT to take cues from other community-based organizations like the NES, the GWS, the ABK, etc, and lead the community from the front, keeping intact the high morals of communal harmony and the good of the state as a whole.

He further advised the MMT to give top most priority to education and also help the administration in “sorting out schools that can be closed down or merged into one, which then can be developed into model schools by the government.”

“The MMT can adopt certain schools and nurture them under its wings, like the NES is doing in Nyishi inhabited districts,” he said.

The CM also called upon the organization to join hands with the state government in the crusade against drug abuse.

“We have inputs that the Mon region, consisting of West Kameng and Tawang districts, is no more free from drugs. You, as the apex body of the Monpas, have a great role in stopping its spread and creating awareness among the youths,” Khandu said.

Achievers from the Monpa community in various fields were felicitated on the occasion. Prominent among them was Padma Shri awardee Anshu Jamsenpa.