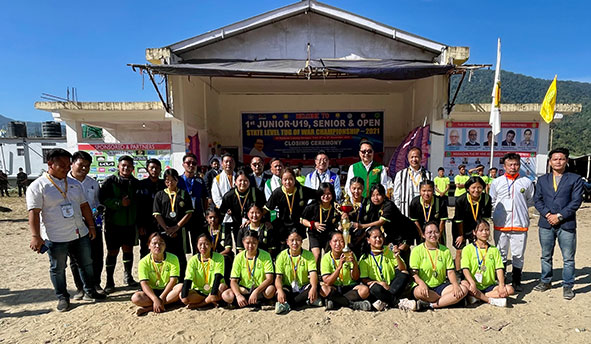 “Our communities have many indigenous games and sports, and efforts should be made to popularize and promote them,” he said, attending the closing ceremony of the State Level Tug of War Championship, organized by the Arunachal Tug of War Association, at the Nyokum Lapang ground here on Sunday.

The DCM, who was accompanied by Indigenous Faith & Cultural Affairs Minister Taba Tedir, assured that the state government would support promotion of “individual as well as team indigenous games and sports of the state.”

Urging the youths to avail the “priority and platforms” being provided by the state government, he exuded hope that “the days will come when the sportsman from the state will also participate in Commonwealth and Olympic Games and win medals for the state and the nation.”

Tedir, who is also the president of the Arunachal Olympic Association (AOA), said that the state has 40 sports associations registered under the AOA, “and amongst them, Arunachal Tug of War Association (ATWA) is the youngest one.”

He assured to extend the AOA’s full support to the ATWA, and asked the association to prepare a calendar of events for tug-of-war.

While lauding the government for giving priority to games and sports, he requested the DCM to “provide certain fund annually for the AOA to carry out the games and sports events smoothly.”

Thirty-eight teams from 12 districts participated in the championship for senior boys and girls, juniors (U-19) and open categories.