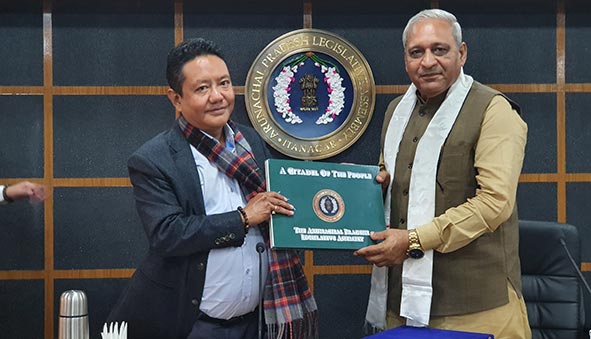 Arunachal assembly is first in the northeast and third in the country to have successfully implemented the National e-Vidhan Application (NeVA) project.

Gangwa said that his state is also planning to bring in the digital project in their assembly.

“We have come here to learn from you as we are also planning to make our assembly paperless,” the deputy speaker said and congratulated Arunachal legislative assembly speaker Pasang D. Sona for having implemented the project successfully in Arunachal assembly.

The Haryana legislative assembly deputy speaker and Sona discussed at length about the NeVA project and other issues pertaining to regional cooperation.

During the course of discussion, Sona said that the whole idea of NeVA project was not only to make all functions of the assembly paperless but also to save time, money and energy.

“A paper recycling unit has also been installed in the assembly complex to re-use the waste papers,” Sona said.

Earlier, the officials of the assembly explained to the visiting team about the functioning of the e-Vidhan project and its functioning.

Deputy speaker, who was accompanied by MLA Varun Chaudhry and a team of officials also practically, experienced the e-Vidhan application.  They also visited the assembly hall, the library, the DK auditorium, the NeVA center and the newly inaugurated paper recycling unit. (Speaker’s PR Cell)