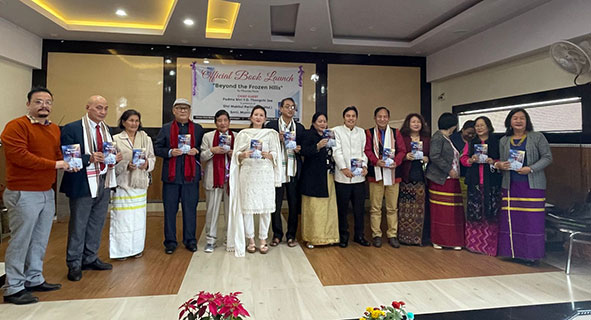 Published by Notion Press Publication, the book is about the relationship and love between two sisters and their aunt. The book also talks about a world of another species of hominids that live amidst people but hidden from view, such as the yeti, the abominable mountain man, or Gretpu as the Monpa community call them.

It is a poignant story about a young girl in Tawang and mostly in a place called Lashikhe in the Himalayas. At the core of the book, it talks primarily about humanity and environment.

Launching the book, eminent writer and Padmashree Dr Yeshe Dorjee Thongchi observed that Arunachal is a treasure house of stories, as different tribes have a myriad of distinct customs which are rarely found anywhere in the world.  Padmashree Thongchi appealed to the new writers to write about Arunachal Pradesh.

Thongchi further pointed out how author Miranda Pertin has brought out the materialistic and artificial lives humans are living as compared to mythical men of another world, especially highlighting the untold miseries women have to suffer in our society.

Terming the novel a heart touching book, Thongchi hoped that there will be more magic realism books coming from Arunachal.

Padmashree Mamang Dai in her remarks said, “All writings are basically a journey, going in and out. Though writing is a social reformation, there is responsibility involved” Padmashree Dai further called for defending freedom of speech and expression.

Sharing her book journey, author Miranda Pertin informed that she came across the mythical yeti story at Lhou village in Tawang, where she drew her inspiration to write the book. “It was a meditative and auto-pilot mode experience without causing any stress. I gave my heart and soul to the book” Pertin said.

She further urged the people to read more books of local authors to make the state literary society flourish.