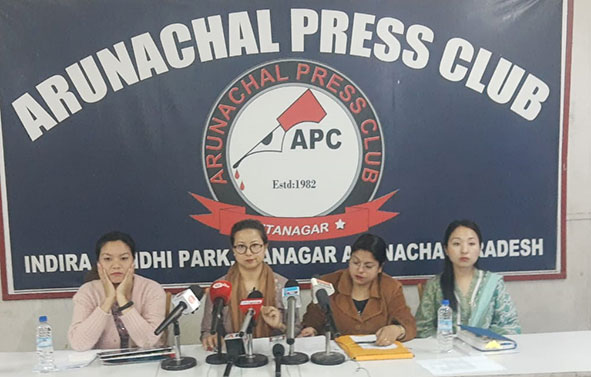 ITANAGAR, 23 Dec: The All Arunachal Contractual Nursing Officers Association (AAPCNOA) on Thursday demanded that the state government create 530 regular posts of nursing officers (NO) to enable the contractual NOs working under the National Health Mission (NHM) to be regularized in a phased manner.

In a press conference, AAPCNOA president Yombi Ango Bagra said that the health department has not created any regular NO’s post since 2014. She said that, in spite of repeated assurances given by Chief Minister Pema Khandu to create regular NOs’ posts to regularize the NHM contractual nursing officers, the government is not keen on creating the regular posts.

“There were so many occasions when Chief Minister Pema Khandu gave us assurance regarding phase-wise manner regularization of NHM contractual nursing officers. Accordingly, our file was resubmitted to the principal health secretary, but there is no action on the file yet,” said Bagra.

“Our plea and prayer to the government is to create a minimum of 530 regular posts for the nursing officers working contractually under NHM,” said Bagra, adding that the health department is entirely relying on the contractual NOs in running the health services.

“The existing regular nursing officers are 599 only (based on old data), which means 25 percent of the total required nurses as per the directorate of health services. The actual requirement is 1,806 NOs. Looking at the financial crunches of the government due to the pandemic, we are being reasonable and are demanding only 530 regular posts,” she added.

Bagra also said that the contractual NHM staffers are not paid their meagre salaries regularly.

“The nature of nursing job is not seasonal or temporary; it is an essential service like police, fire fighter, etc, and none of these departments recruits on contractual basis, except for their auxiliary staffs,” she argued.

The AAPCNOA president questioned why the government is giving step-motherly treatment to the NOs, “unlike the other essential services which have direct regular posts creation.”

The association cited the example of the Assam government, which it claimed created 300 regular NOs’ posts at the GMCH on 28 June, 2020.

“If there is no positive response from the authorities concerned, then we, despite our unwillingness, will have to take democratic steps,” the AAPCNOA stated.