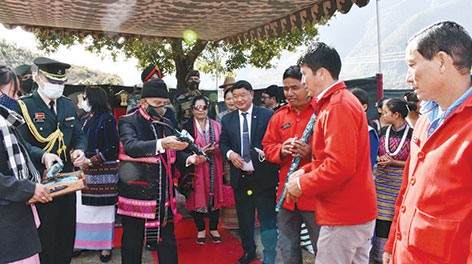 KAHO, 2 Jan: Governor BD Mishra and his Assam counterpart Jagadish Mukhi, along with their respective wives celebrated the new year with the villagers of Kaho, the easternmost village of the state, located along the border with China, on 1 January.

Interacting with the villagers, Mishra said that his visit to Kaho – the first ever by a governor of the state – along with the Assam governor “aims to reinforce the sense of oneness and belonging with mainland India.

“It also assures the people in the border areas that the central and state governments are earnestly putting all efforts in bringing equitable development in the remote part of our state,” he said.

The governor assured the villagers that Kaho would be developed as a model border village “by facilitating all-round development and sustainable source of economic activities.”

Urging the villagers to send their children to school, Mishra called upon the army unit commanders to provide tuition and study materials through their education branch, in keeping with their sadbhavana missions.

The governor also reached out to the soldiers in the forward posts. He interacted with the troops at border village Kibithu in Anjaw district. 2 Mountain Division Deputy General Officer Commanding, Brig KS Kalsi was also present at the meeting.

“It is because of the preparedness and grit of our troops in the borders that our frontiers are safe,” Mishra said, adding that “it is the trust of the valiant soldiers amongst the people that every citizen feels secure.”